This is going to be a mish-mash of a post, we’ve been more or less van-bound! So here’s a bit of a round up of the last couple of days. Even though we haven’t set out to do anything in particular, Spain has kept her side of the deal and delivered some lovely moments!

Having stinking colds is becoming a bit of a pain! I am feeling a lot better but the Hubster is having trouble shaking it off. So today, it was a trip to the Farmacia!! Yes they spoke English and we asked for a Chesty Cough Syrup and a Nasal decongestant spray, if that doesn’t work, I’ll have to get out the wild horses and drag him to the Doctor! That won’t be easy so cross your fingers with me that these preparations do the trick! having said all that we really can’t complain, every day we’ve got up, loaded Charlie into the car and gone for a walk on the beach, even when it’s been really windy, it’s been a pleasure to breath in a lung full of sea air, it just has to be good for us, it feels that way to me anyway!

Our friends Judy and Steve left this morning, deep down we envied them, it’s a lovely feeling leaving a camp site, hitting the road and not knowing what’s ahead. It’s a shame as we didn’t see much of them over the last couple of days and I so wanted to whoop their backsides at Boules!! (Watch out, you two, we’ll catch up with you someday!!) There’s no way we’re moving until we’re both up and running and fighting fit again. We wished them a safe trip and promised to keep in touch, which we will. We’ve met some really lovely people during our trip. Just this morning a Danish lady came and enquired as to how we were, she’d noticed we hadn’t been out very much and wondered if we were ok and if we needed anything. Next thing I know she’s brought round a pot of Danish Honey that apparently has excellent healing qualities., I’ve taken a large spoonful of it and we shall be on the honey and lemon later on!Our French neighbour had her whole medicine chest out, and offers of Echinacea, homeopathic tincture, drops and  potions were offered up. It’s been a joy meeting all these lovely people.

We didn’t take advantage of the hire car as much as we had planned but yesterday we used it to drive into Cartagena to do a Lidl shop! In a desperate attempt to find a public loo, I nipped into the local train station, no of course there was no loo,  that would be far too much to ask, but it was a cracking building and I found that I got preoccupied with the camera instead of worrying about the loo! Although I do wonder what all the waiting passengers thought of the over excited, jigging woman with the camera!! 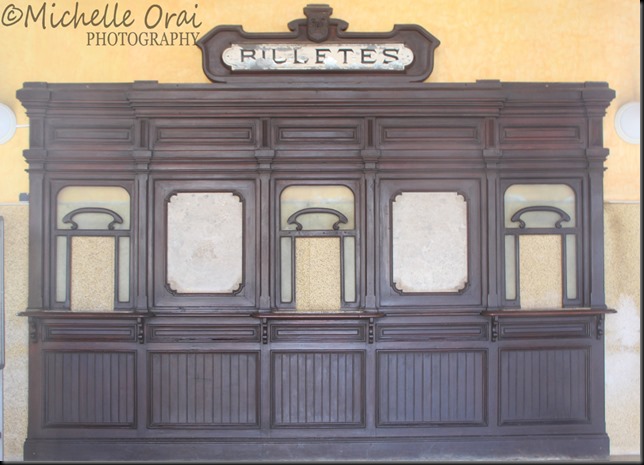 The paint may be peeling but behind this is such a beautiful building.

The amazing ceiling at the station

The drive back was interesting to say the least! I asked if we could drive back along the coast, we set the crazy Sat Nav woman and true to form she found a road that is used only by boy racers, those with a death wish and the local goats! I am seriously beginning to wonder if it’s because the Hubster is a Capricorn, that we almost always end up on the most incredible, vertiginous roads! This one wasn’t even paved, it had the obligatory sheer drops and hairpin bends and yet it was on Madame Sat Nav’s  itinerary!  Why oh why? We’ve come so far and she’s still trying to kill us off!

This morning was another lovely example of Spanish service. We popped into the local Tobacco shop, yes I know, we shouldn’t but I’m afraid we do and there’s nothing that’s going to stop us now, so please save your breath! And yes, I know we’re both under the weather, if it’s any consolation, we’re not even smoking half of what we normally do! Anyway, I was saying we popped into the Tobacco shop and asked for our stash of ciggies, the shop owner was so pleased and happy to serve us, he gave us a free bottle of wine! Now that’s not something you see everyday! It’s not as if he has a massive mark up on the cigs as they are the same price across the whole of Spain, not like in the UK where the shop owner, picks a number, doubles it, adds on a couple more quid and makes a profit! Oops have I just had another rant without even noticing? Well, it was just such a refreshing change to be treated as a genuine customer and not a leper on the fringe of society!

I so want to write a post about this campsite but I need to take some photos to go with it and as the site is so big I’ll need to go out on the bike. I’m not sure when I’ll get round to it as next week we have rain forecast and the temperatures are dropping Brrr.!! If we can only get fit, we could move south for a while and ride out the cold. I’m amazed at how fickle I’ve become, I had no idea the weather was so important to me!!!  Also as I said to my friend on Facetime this morning, this trip has become more a discovery about ourselves than a discovery of countries and culture.