We nipped down on the bikes into the village of St Martin en Re, to have a look at the port at night time. I forgot my camera, I can’t believe it, the sunset was truly incredible. I’ve never experienced anything like it in my life and you’ll have to take my word for it. We climbed up onto the ramparts overlooking the sea walls and there was the ocean, it looked like liquid gold the colours were, and I hate to use this word, but, AWESOME. I’m sure I let out a gasp as I saw the view and I believe my chin hit the floor. I felt sick to my stomach as I watched everybody else taking photos!!! Ah well, we cycled back as quickly as we could (uphill) and wheezing and spluttering I rushed off at a trot to try and capture what was left of the sunset up the lane from the campsite. By now it was blood red and it looked as though the sky was on fire!

The end of the sunset

The next day, it took us longer to pack up the van than it did to reach our destination! We travelled a whole 4.3 kilometres to Le Bois-Plage, known surprisingly enough for it’s beach, 7 kilometres of it. We found a lovely aire, just behind the dunes and paid 6 Euros for the night and 2 Euros for 12 hours of electricity. It was just a stone’s throw from the beach, we could hear the crashing of the waves from the van. We walked Charlie to the beach, damn, a big sign, NO DOGS!! Normally, we would have, kind of ignored this but being Sunday, every Retois (inhabitants of the Island of Re) and his wife was out, we were really surprised how busy it was. We took to walking along the dunes and it was lovely.

Even we couldn’t get Charlie on here without being spotted! 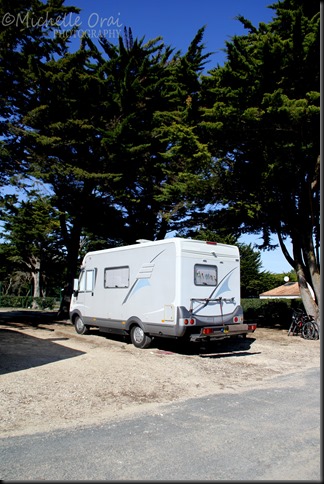 Lovely aire just behind the dunes

We cycled into the village of Le Bois=Plage, I’ll admit we were both disappointed, it claimed allsorts of sights, a music school, a town hall, a thriving market place (in the summer maybe!) and an anchor!!! I think they’re clutching at straws with that one. We wandered around the pristine little town, but to be honest it really didn’t float our boat at all.  As for the music school, since 1921, blimey there are residents that are older than that!! 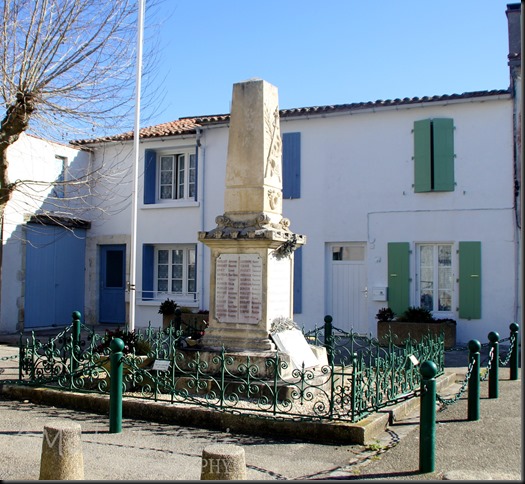 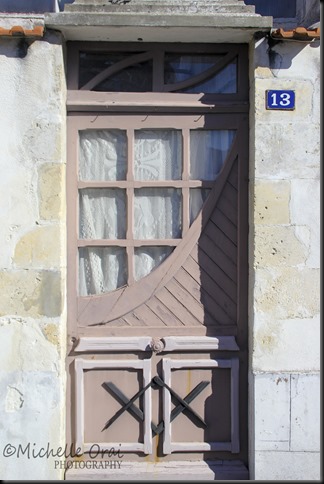 Loving the ice cream graffiti though

Anyway, we had an evening the beach with no one else at all. We took Charlie with us and witnessed a lovely sunset and he enjoyed the sand between his toes once more. We settled in last night and having electricity we watched a film.

Sunset watching with Charlie in tow!

This morning we were up with the larks and took to the beach to see the sunrise this time! The moon was still in the sky, it was superb all the more special with the roaring of the waves crashing on the shore. 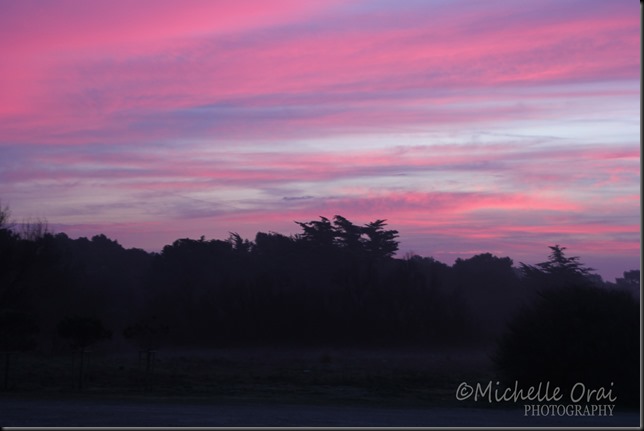 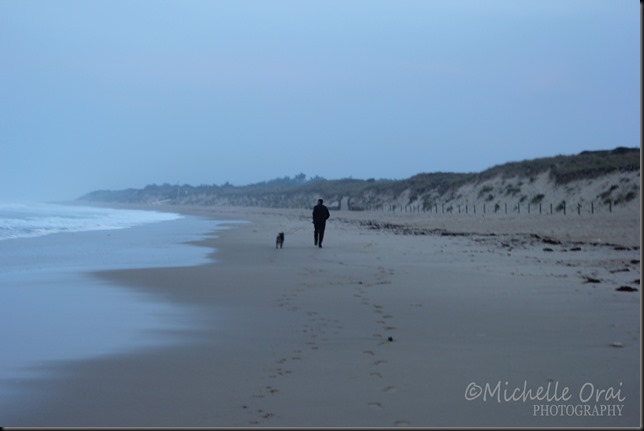 We left heading towards Cognac! Hic!! We stopped off on the way at a little village called Port d’Envaux. I’m not quite sure how I found it, but so glad I did. In a clearing in some woodland on the outskirts of the village is a collection of sculptures. The rocks around here, ‘les pierres de Crazannes’ lends itself to be worked upon and there are a series of caves and rocky crags that have been sculpted in the most beautiful way. There are some really talented people out there. 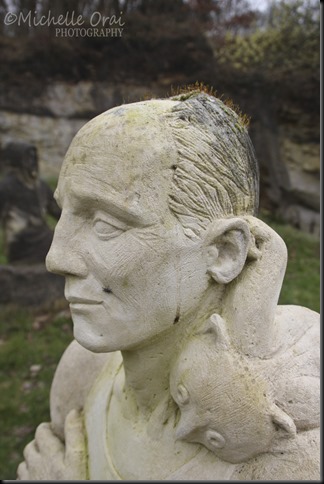 Love the moss on this statue, it looks as though he has hair growing!

I’m apologise if this post is written in haste but I’m on the laptop, we have no electricity and so I’m working to a deadline, i.e.: before the battery runs out!! Oh and I thought you’d like to see this, we were driving through the village when we saw all the posters, the circus is coming to town along with camel and a cow type animal with horns!!!

A strange sight in a French village!

2 thoughts on “Motorhoming in France … from Beaches to a little culture!”