Hello to everyone, sorry I’ve been so busy that I really haven’t had time to blog so this is a bumper edition with loads of photos and a quick run-down of where we are up to!!!

Ignore the title of this post – we’re not really lost but we are just smooching around trying to work out what we are going to do with our future, but I won’t bore you with that! 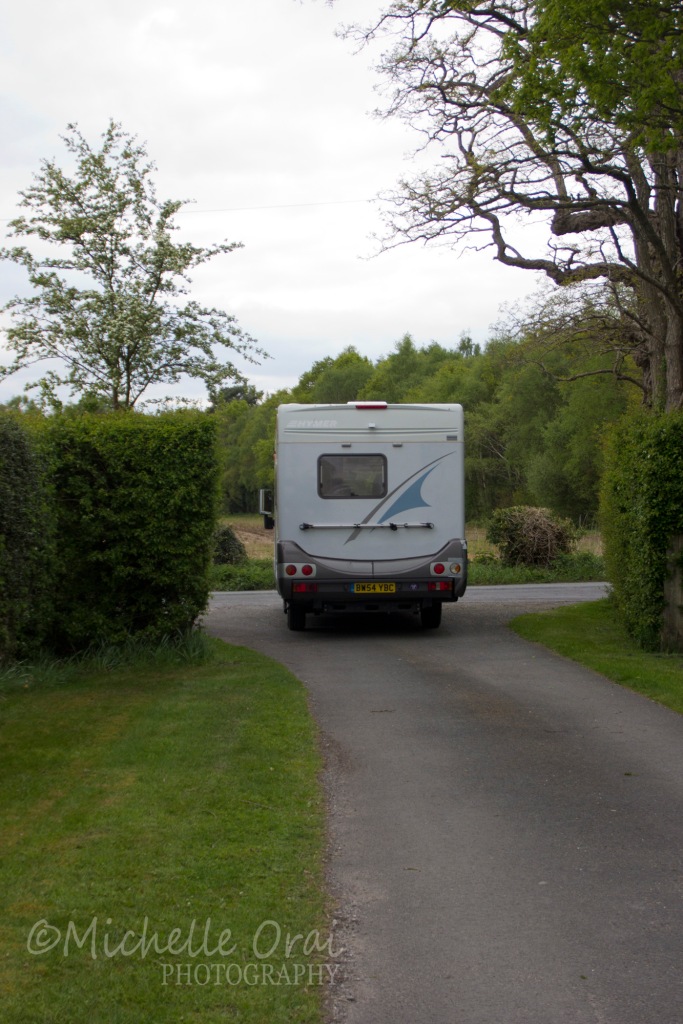 We have been back to the UK and caught up with friends and family, and of course had the MOT carried out on Harry, he passed with flying colours and as much as it pains me to tell you all, Harry the Hymer has been sold. I cried my eyes out and felt bereft for days afterwards, even now, I really can’t describe how much I miss pootling around in the van. It was a way of life that I had grown to love and yet as I’ve said before, it’s time to be grown-ups and maybe think about earning a living once again! This task is in fact becoming more and more difficult as we are in a region of France (the Dordogne) that just makes me want to take photographs from morning til night. It is a feast for any amateur (or pro for that matter)!! 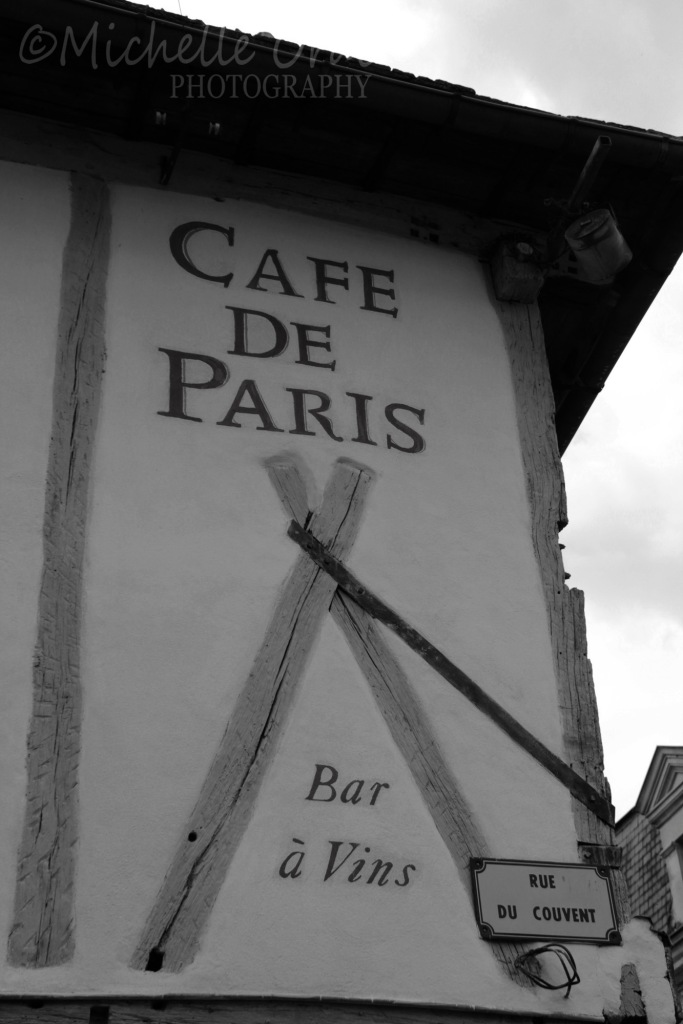 Cafe de Paris in the little village of Eymet.

We visited the Lake District whilst in the UK (for the non-English readers, it is a region that is full of mountains and yes, you guessed it, lakes! It does tend to rain quite a lot up there but we were blessed with blue and white skies and managed to stay dry if not a little nippy with the brisk wind. 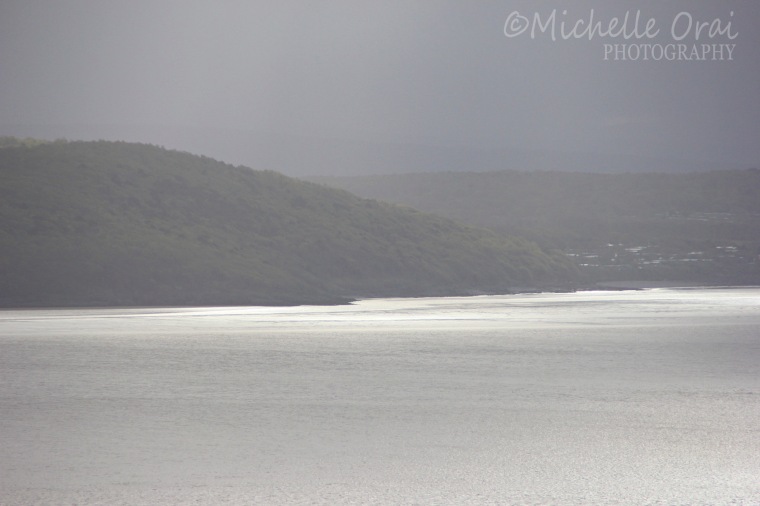 View from our rented cottage 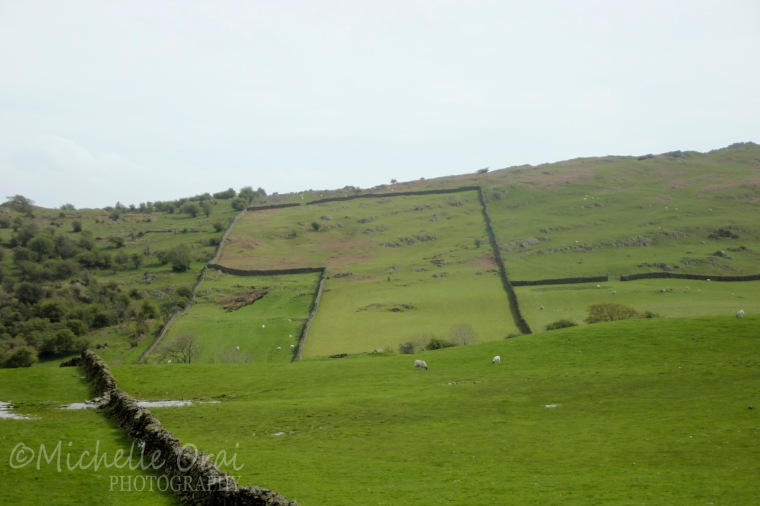 Not a bad view to wake up to?

Told you there was a lot of water!!! 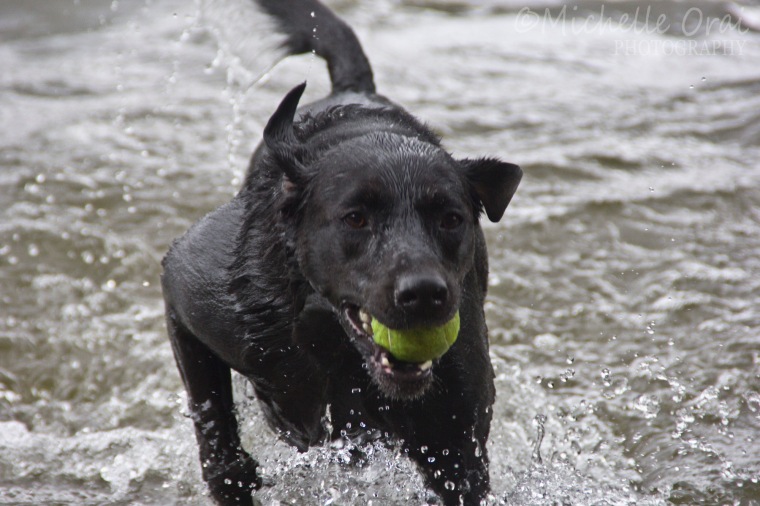 My sister’s dog, having a ball (literally!) Charlie watched from the shoreline, still not keen on getting wet!

One of the many lakes!

Now I will however give you a glimpse of what we are seeing around us at the moment. We’re back in the Dordogne region, well it would be rude not to visit it a third time don’t you think? We really did like this area and thought we should give it another shot, well you never know what might happen. 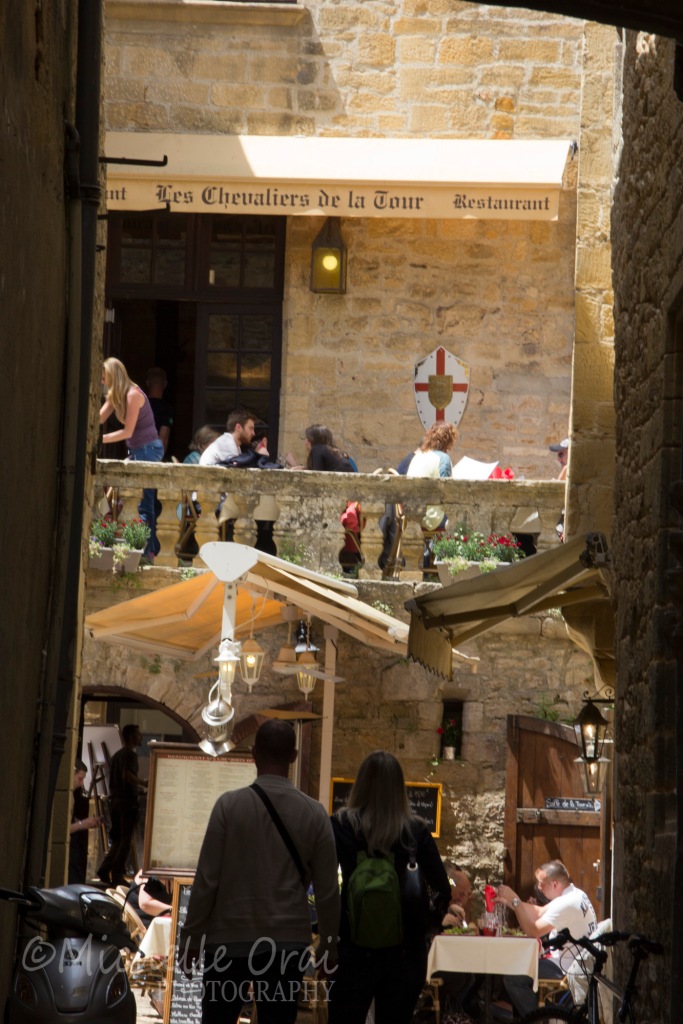 The incredible, medieval town of Sarlat la Caneda. Do visit if you’re ever in the area, it’s a must.

One of the many Perigordine houses that just make you dribble! 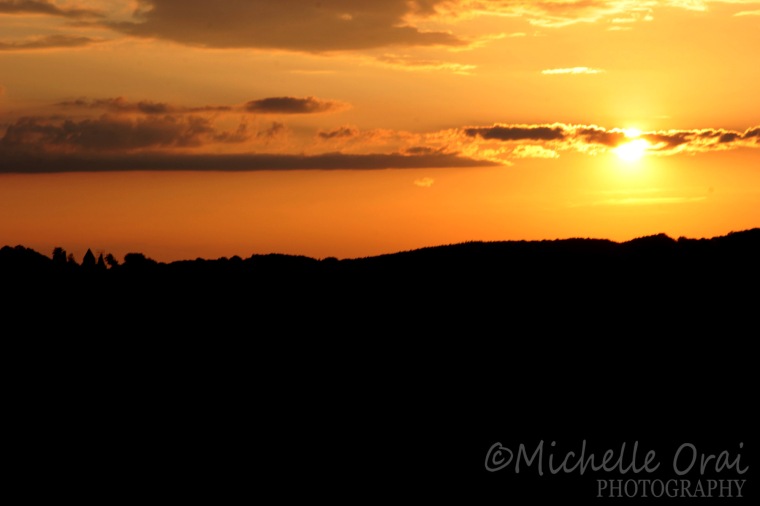 We have been treated to some beautiful sunsets. 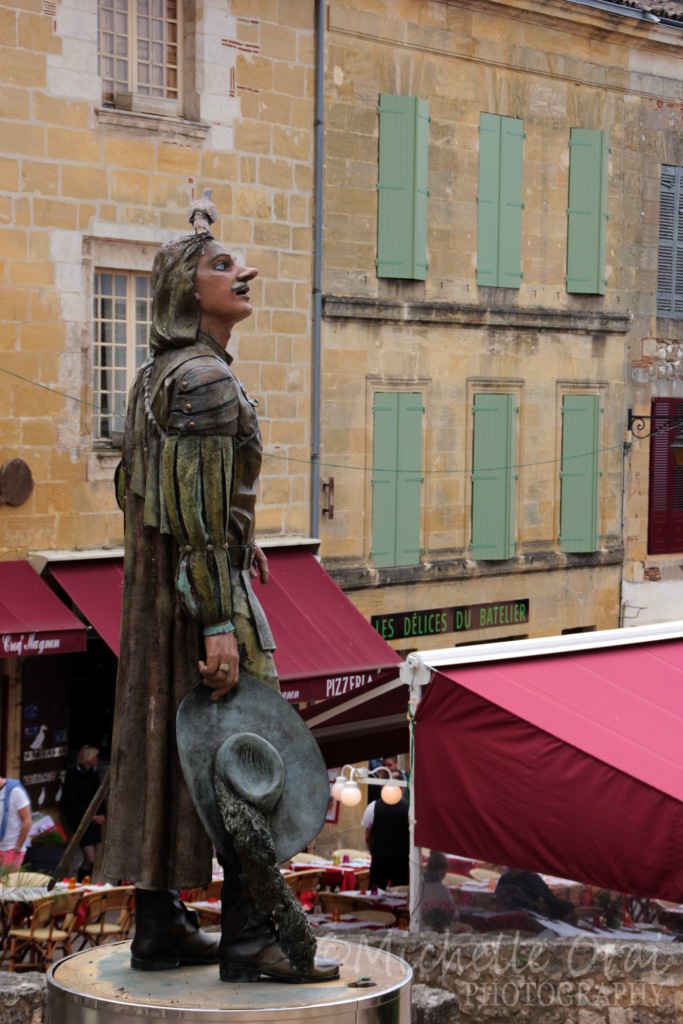 A day trip to Bergerac, one of the wine growing regions, Here a statue of Cyrano de Bergerac.

Wade through the castles, the bastide towns, the beautiful, honey coloured stone houses, narrow streets and the incredibly beautiful countryside and you’ll pick up the odd British voice. In fact the French have named this area Dordogne-shire in reference to the amount of ex pats that live here! Having said that, the region is so large that they are pretty well spread out. They are discreet (so discreet I wouldn’t even know they were English except for the give away ‘Marks and Spencer’sandals!). They are obviously loving the French way of life. I’m not sure what I expected but I’m glad to report that the Brits are very well behaved, well so far anyway!! In Spain, there was much more evidence of the English and the country catered for them ie: shops, food, entertainment etc, however here it seems that the ex pats move here to become French and enjoy what France has to offer.

The little town of Lalinde.

Last week, however, I found myself almost choking in amusement! I was stood, loitering with intent, actually I was waiting for Charlie to have a wee!! (But that doesn’t sound quite as exciting does it?) And yes, I’m glad to report he’s still with us, although on a sadder note, he sleeps ever such a lot and isn’t at all keen on walks. He’s now very deaf and spends almost every minute jumping out of his skin when some noise does get though to his slumber and surprises him. Poor little chap. 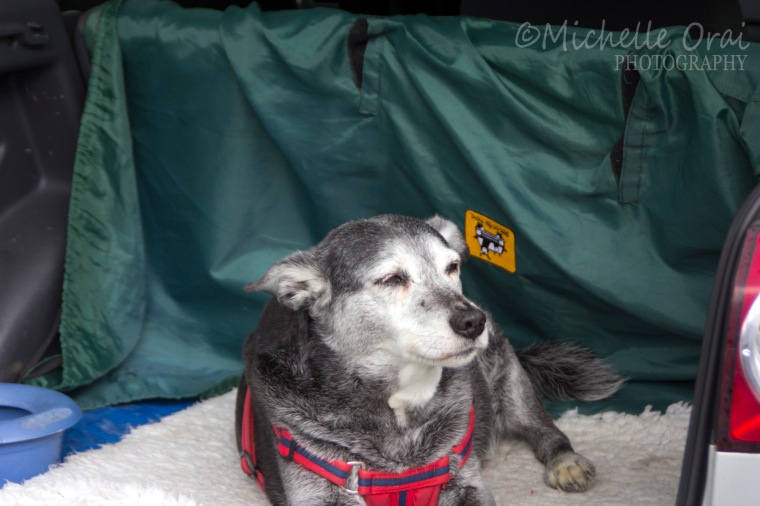 Still going strong, although a little confused at times.

Anyway sorry, I’ll come back to all of that later no doubt, now then where was I, ah yes …

… loitering in a car park when up pulls a little Citroen 2 CV,  with a French registration plate. “Ah” I thought “here comes a local” Out of the driver door gets a man, now then you just have to close your eyes and imagine this …although I do appreciate it is very difficult to read with your eyes closed! Anyway back to my story, out gets a tall, thin man, with walnut-brown skin and a mop of white hair, he is wearing linen trousers, white, very loose,  linen trousers, which just come down to the calf which he continues to hitch up, I was sure at one stage I would be treated to a sneaky view of a beautifully brown bum! He is wearing a navy blue and white striped t-shirt, and a pair of … wait for it … espadrilles, I’m sorry I didn’t catch the colour of the shoes, I was too busy pretending to get something out of the back of the car to stop myself from ogling and giggling! He talks rather loudly to his wife, “Darhling, can you just open the boot?” she is petite, and is sporting a pretty, flower print scarf, jeans and generally looks lovely and spring like. Out comes the shoulder length wicker shopping basket with leather straps. “Shall we get the ‘Baaguette’ first or not maybe we could get the ‘Baaguette’ afterwards?” he drawls in a very, very British accent.

They potter off to the Bread shop and come back with the ‘Baaguette’ in their basket, they then nip into the little supermarket and come out with various bits and bobs in their basket and guess what? A bottle of red wine and a bottle of Pastis in each hand!

These guys have read far too many novels, ‘A Year in Provence’ has such a lot to answer for. I have no problem with people being who they are and dressing as they like but this was just so over the top, if the chap had had a string of onions around his neck and his wife a floaty skirt carrying a basket full of sunflowers, I think I wouldn’t have been any more surprised! I truly believe they are of the opinion that they ‘fit in’.

As I read this back to myself I sound I sound condescending, conceited and  mean. I really don’t mean to be, it was just such a stereotypical vision of the Brits in France, I honestly couldn’t believe my eyes. In my defence, I would like to say that  I’m sure they are just perfectly lovely people who I’d probably get on very well with  but I think they really have gone over the top with the integrating bit!! 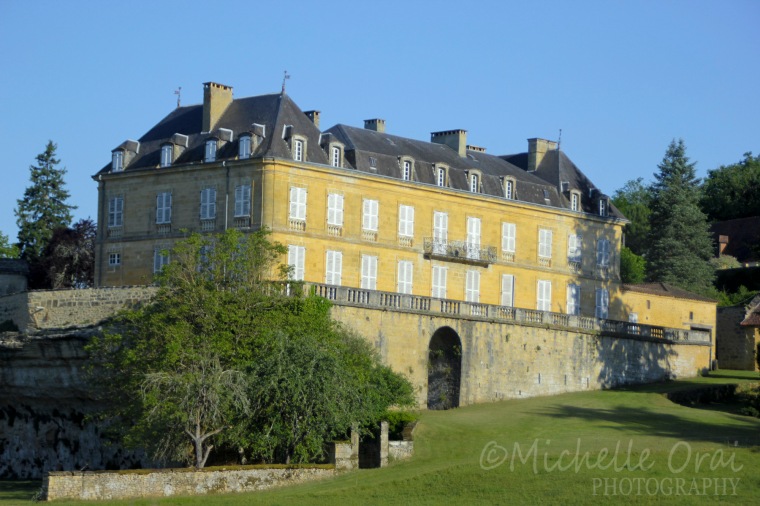 So many castles that we don’t even get all the names!

We have found that this area is just so picturesque and there are a multitude of beautiful little villages, that need visiting. We’ve taken to going in the evening when the sun is low and gives the most beautiful light to the pretty stone houses and sheds an incredible luminance to the countryside. Last night we went to a village called Daglan, which is about 20 kilometres from Sarlat, a lovely drive along through the wooded valley and we find the most pristine village of incredibly beautiful houses. I aplogise for using the words beautiful and incredible so often – I really must find a thesaurus! 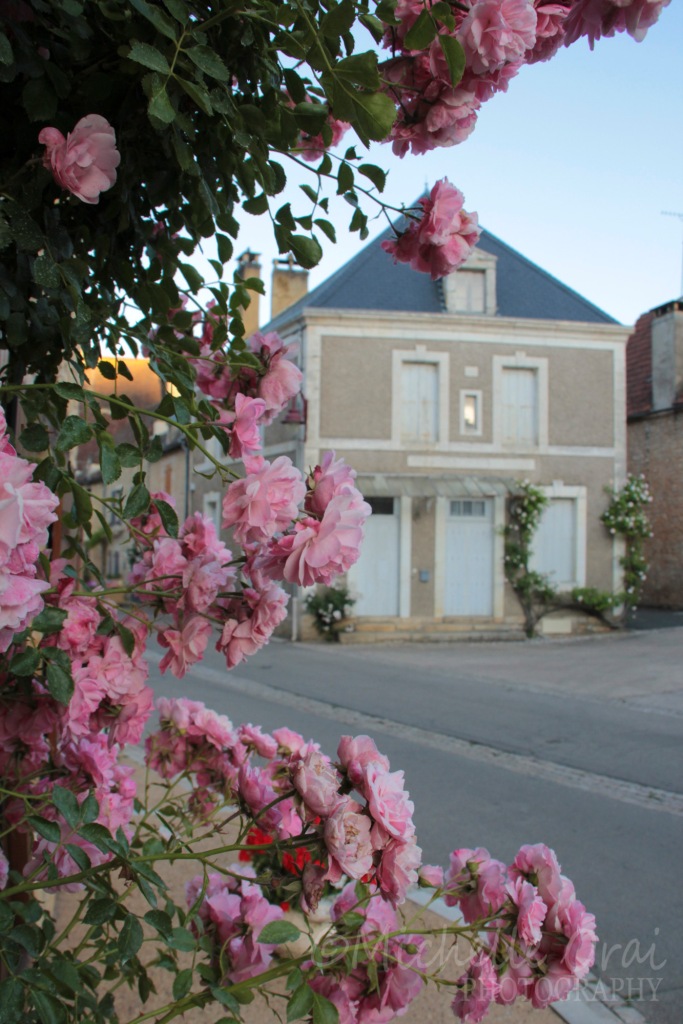 The town square at Daglan

The sun going down over the church

Another of the wonderful little houses here in the Dordogne.

Another great thing about this region is that up the road in a nearby village are some of our neighbours from the UK! So we popped over for a visit and in true, Michelle fashion, I took advantage and took some photos of their very special dog, Freddie. What a star!

Are you ready for Freddie?

Well I hope you’ve enjoyed this update – do let me know! I shall endeavour to write a couple more blogs while we are here and share some of the stunning views. Take care all. Over and out for now!!

4 thoughts on “Lost in France”