We had a little, day-trip to a village called St Amand de Coly, it is yet another of the villages that is classed as one of the most ‘Beautiful villages of France’ and on first appearance you can see why. 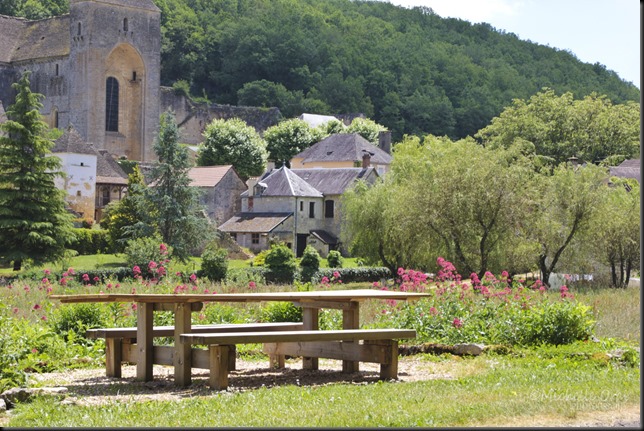 Picnic table with a view!

It was a lovely warm day and we could see the imposing Abbey in the distance, a visit was required! We wandered around the little village, which is actually more of a hamlet (it has a population of 386!) I have a confession, I love visiting churches, I find them fascinating and although I don’t visit one on a regular basis, as a parishioner, I always feel a sense of calm and serenity and goodness when I enter a place of worship. 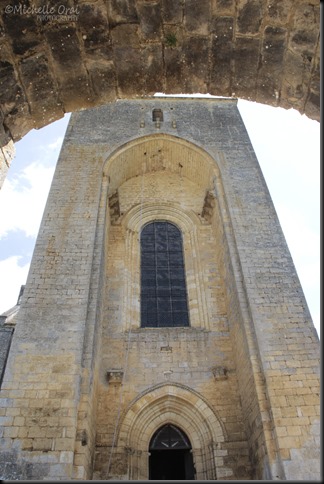 As we approached the Abbey, I can only say that I had a distinct feeling of dread and foreboding, I felt very uncomfortable. I stepped forward and climbed the remarkably, old and deformed, stone steps to the Abbey doors. I can’t describe what happened but I had a very strange experience and I felt so uneasy that I couldn’t enter. That’s a first for me. I did wander around the outside of the Abbey but felt very strange and so the visit was curtailed!! 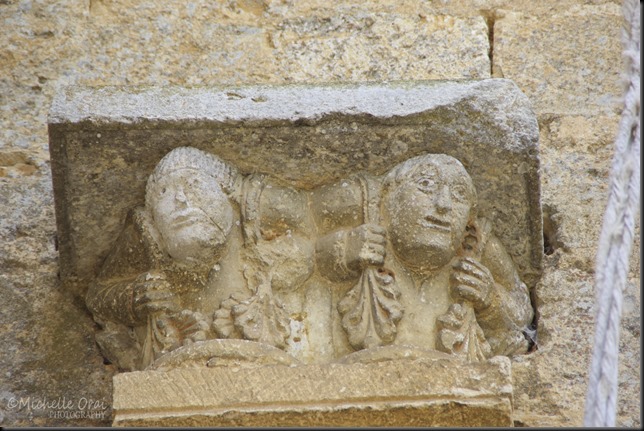 Was someone watching me? 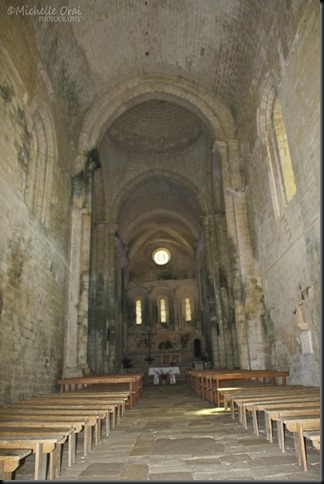 Taken from the doorway, I couldn’t go in! 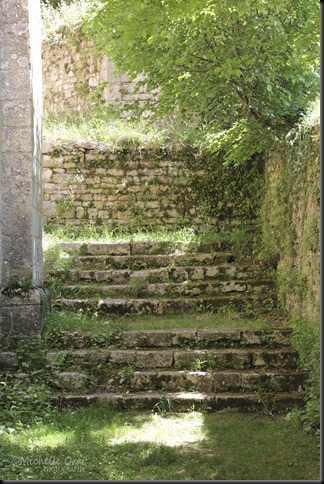 Unused steps beside the Abbey

The rest of the village was lovely, very, very quiet, no souvenir shops or touristy attractions. It has many information plaques dotted around the village giving information which was lovely to read and I felt as though I had actually learned something. All the same, I won’t be returning!! 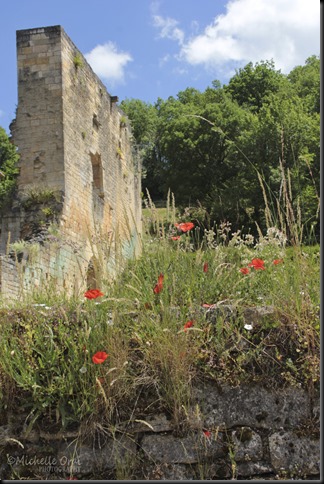 We’ve had a spell of lovely warm weather and I’ve noticed that the countryside is slowly turning from deep, luscious greens to a golden honey, yellow. In the hedgerows and in the fields of corn there are so many bright, red poppies, it really is quite stunning. The poor Hubster is constantly having to park up on the side of the road so that I can pop out and take a couple of photos! I’ve also noted that there are so many fields that are now planted up with sunflowers, that promises to be a stunning sight. 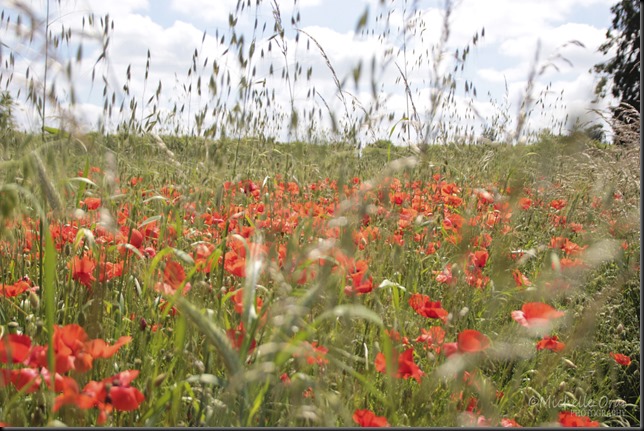 A sight to brighten any day 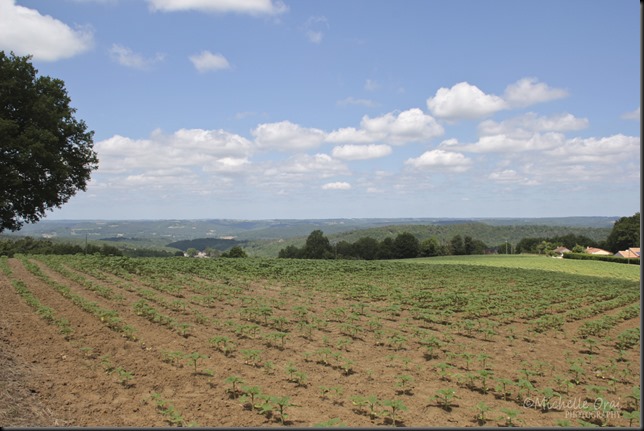 Beautiful views of the Dordogne countryside.

We didn’t expect anything of any greatness or excitement to happen yesterday. We were sat on the little decking area, outside our chalet, drinking a coffee when we both thought we heard a noise, what kind of noise? Well, it certainly wasn’t a crash or a bang, more of a thud with an attached “Ohhhhh Noooooooooo” or something like that!  We waited with ears twitching, would we hear any more, had we actually heard something in the first place? Then again a kind of loud moan! 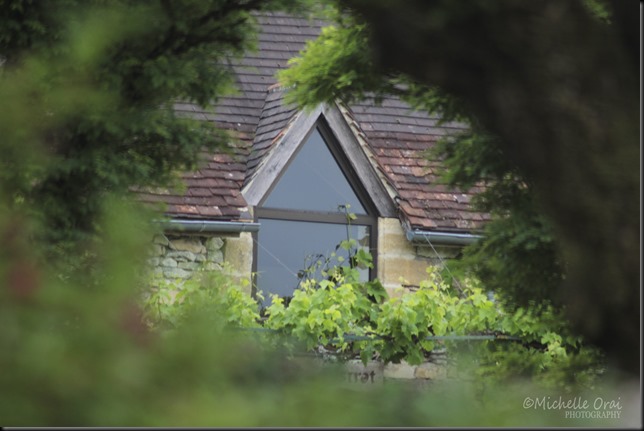 A pretty little window, here on the campsite

The Hubster, set off down through the camp-site (with much encouragement from me, of course,) “Go on, go and see what it is!!!” A few minutes later the Hubster was nowhere to be seen. Aha, something had happened!!! I followed suit and toddled off down the little, narrow lane that winds through the camp-site. Oh my word! I could hardly believe what I saw! The lane becomes narrower and narrower and on the one side of the lane is a verge of grass and then a sheer drop down about 20 foot into a little meadow. On an angle and wedged into the ground was a caravan!! How on earth did that happen?  More to the point how on earth were they going to get it out?

I couldn’t believe more people hadn’t heard it or if they had, why they hadn’t turned up to give some support?  A chap and his wife, who I later learned were Dutch, had driven down the lane hoping to turn around, they’d unhitched the caravan and were using the remote control, caravan mover to manoeuvre it and turn it around so they could then hitch it back onto their car and leave the way they had arrived!  Well, the story goes …. that the wife was in charge of the remote and pushed the ‘back’ button and kept it pressed down, which resulted in the caravan taking the plunge. 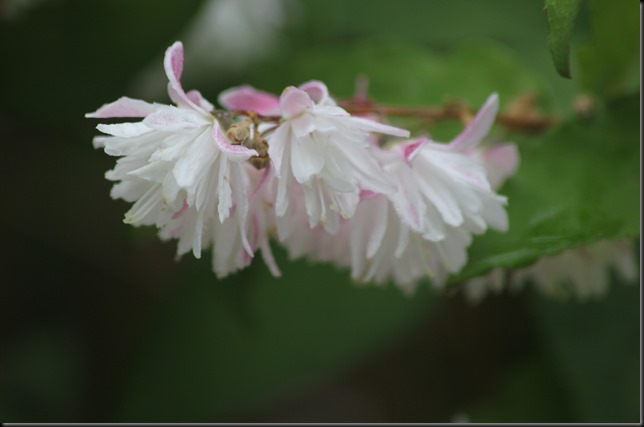 Just some of the lovely flowers that are blooming now.

As you can imagine, the couple were in total shock, they were in their mid 70’s and on their holiday. Everything in the van was upside down, plates broken, fridge contents all thrown about and bottles of wine shattered and oozing their blood-red contents on to the interior of their pride and joy. My heart bled for them, they were too shocked to be distraught! What on earth could we do? The Hubster certainly couldn’t move the van, in fact, 50 men couldn’t have moved the van, it was totally wedged on an angle with no room for manoeuvre! I did what all women do in this kind of situation, I offered a seat and a drink, I wanted to offer tea, (but not being a tea drinker) we had to settle for mineral water. The wife came back with me and sat on the decking, she was as white as a ghost and any English that she knew, had left her, in fact, I believe at that time she couldn’t remember any of her mother tongue either! We sat and I did my best to console her, she sobbed, she must have felt terrible and so incredibly guilty as it was she that had ‘done the deed’!! Poor love! A while later the Hubster returned with the husband. He had called their insurance company who were going to send a crew to help dislodge the now abandoned van.

It took two hours to remove the caravan, and not too much damage was done, a crack in the body work and a broken jockey wheel. Thank goodness no one was hurt. The couple came back to see us yesterday bearing gifts!! A bottle of red wine and a box of choccies in thanks. What tickled me the most though was their lovely hand written letter with a little sketch of the caravan at the bottom!!

2 thoughts on “It’s all happening down here!”