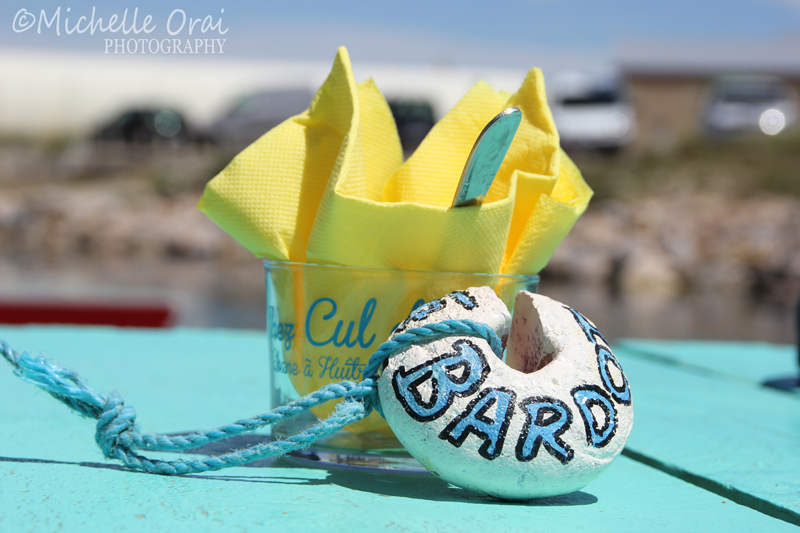 Yes I know, we’re not working, so how on earth can we take a week off? Well, we are busy doing up the house and we are now at a point where even though it’s far from finished, it’s livable and we were feeling ready for a break or at least a couple of days away from the dust!

My sister and her husband had  booked a week at a golfing resort not so far from here,  so our clubs were duly dusted down, shoes polished and we loaded up the car with high expectations for the week ahead.  We were heading to another department of France down on the south coast, this time the Pyrenees Orientale. I was so looking forward to just relaxing and enjoying the fine weather.

Well it wasn’t to be, we woke up on the first day, the skies were not grey they were black, the wind was up and it was cold and down right miserable. What to do? It was a Sunday and wet, so we set off for Perpignan in the hope that the clouds would be scattered by the wind and the sun would put in a welcome appearance.

Perpignan is a  lovely town, we parked in the City Centre in and went off discovering on foot, it didn’t rain too much but the sun was absent. We enjoyed wandering around the historic centre. I never tire of winding, narrow streets and alleyways, I love the architecture down here, the colour of the buildings and the balconies. 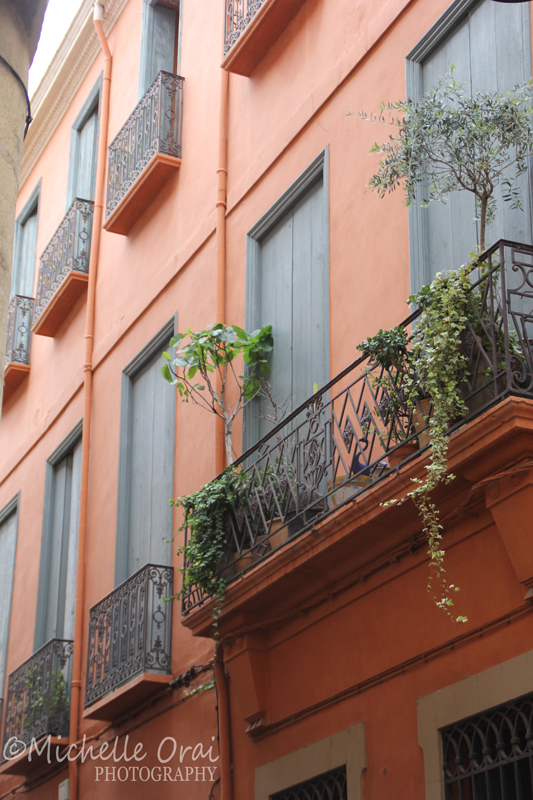 I just love the colour of this building

One of the many alleyways 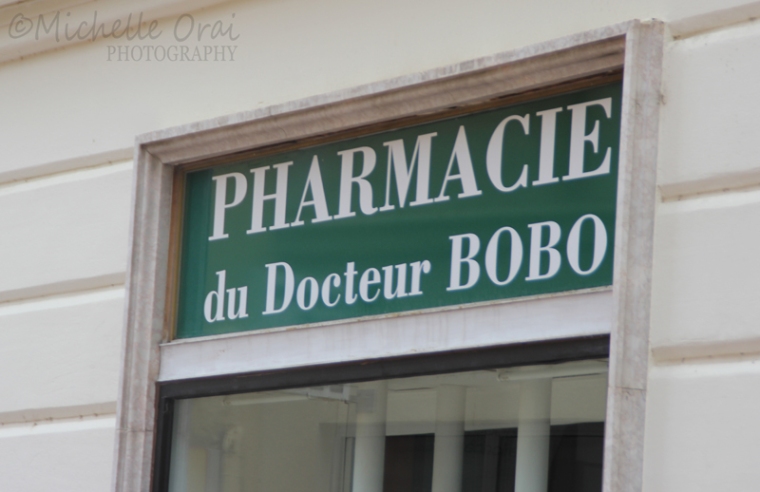 No takers for the city’s bikes -far too wet!

Some lovely facades on the buildings 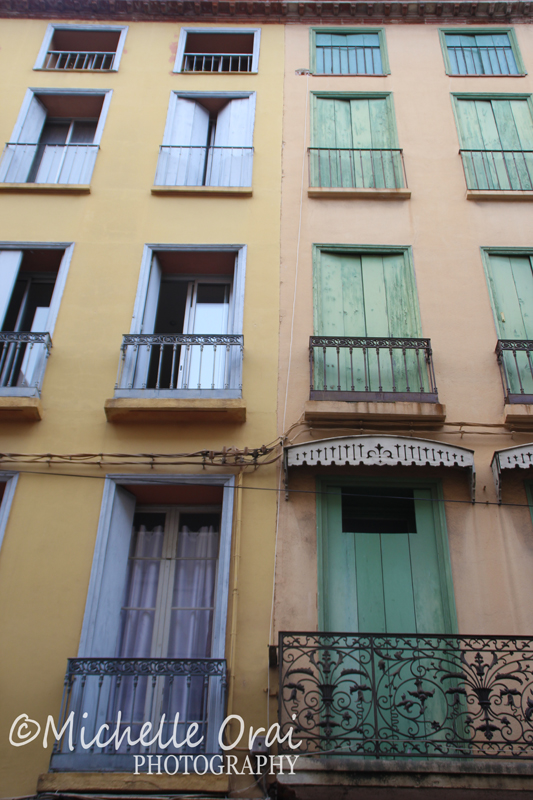 Colours that brighten up the greyest of days.

A little bit of window shopping!

On our way home we decided to brave the weather and go and walk on the beach, it was a struggle! The wind was howling and the sand was whipped up, lashing our faces. The normally calm turquoise Mediterranean was angry and grey, crashing white, powerful waves onto the near deserted beach. Our walk was rapid, to the edge and back to the warmth of the car!

I think you’ve understood by now that Golf was off the menu! So day trips were going to be the way forward for the week. Each night, we gathered around the television and many a ‘shush’ was shouted out as the weather man appeared in front of a distinctly grey map of the south of France. (I may just point out that Paris was hitting 27 degrees!!)

Our next day trip was to Collioure, which is a lovely little fishing village on the coast (going in the direction of Spain) We had passed here two years ago in Harry the motorhome, it was one of our less successful days as we’d arrived just as the traders were closing down on market day and ended up in a right mess with a 3.5 tonne motorhome winding our way through the stalls, I can assure you, it’s a lot easier to undertake the narrow streets in a car! As we arrived the sun came out and we ambled around checking out the little side streets. We ended up having lunch in a wonderful little restaurant called Chez Simone on the front, overlooking the sea. I can highly recommend it, we ate so well, starter of Carpaccio of Sea Bass, followed by Sea Bream, and finished off with a delicious strawberry and almond basket. We had a lovely bottle of chilled local wine and left feeling as though the holiday had started!

How long can you make a drink last with a view like this?

And the sun came to join us. 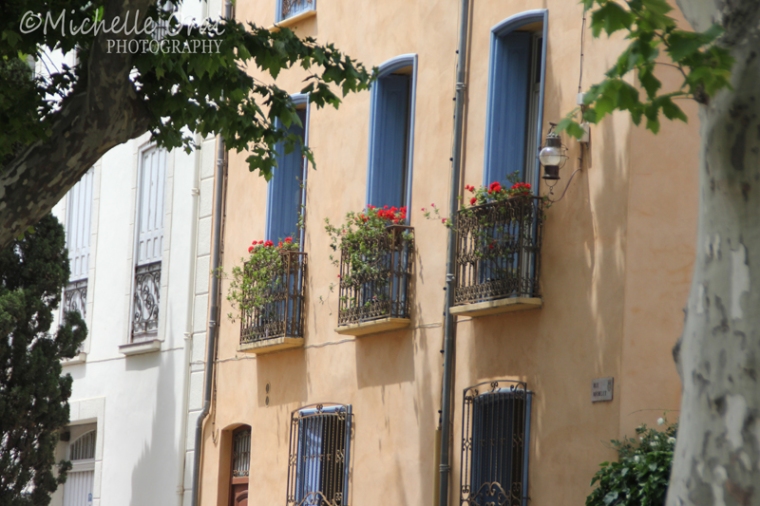 The next day we went on a trip to Spain, well it’s just a 30 minute drive, on arriving on Spanish soil, the weather took a turn for the worse and so four heads came up with the idea of driving further south. There is a town called Girona, which we had missed on our motorhome trip due to lack of parking. Well, what a lovely surprise, the sun came out and after driving around for at least an hour waiting for a parking space to free up, we entered the town. It was now we realised why the car parks were all full to overflowing … Girona was celebrating the ‘World of Flowers’! What a lovely surprise! Every street was decorated, with flowers, hanging baskets, works of art, colourful displays, every fountain, doorway and staircase had flowers strewn upon them. It was truly a sight for sore eyes. I can also say that even without the flowers the town itself is beautiful. We had a wonderful tapas lunch consisting of Spanish cold meats, spicy potatoes and fish beignets. Fabulous. 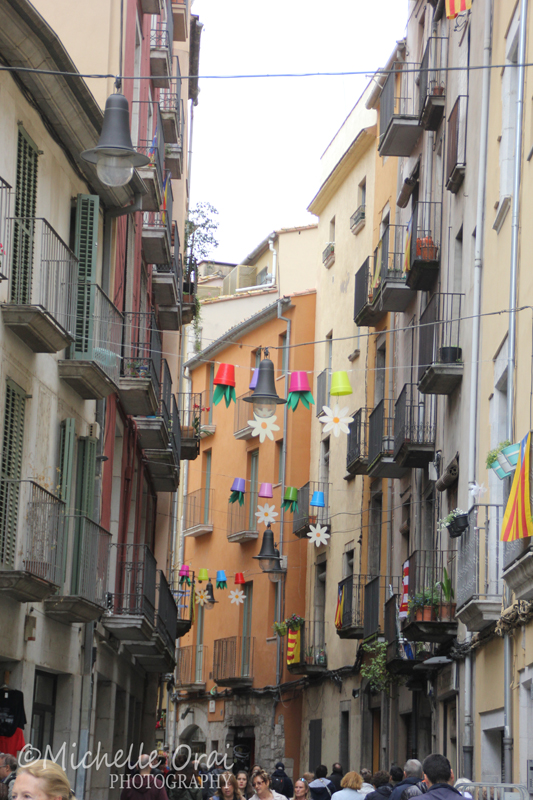 A fountain filled with Hydrangeas. 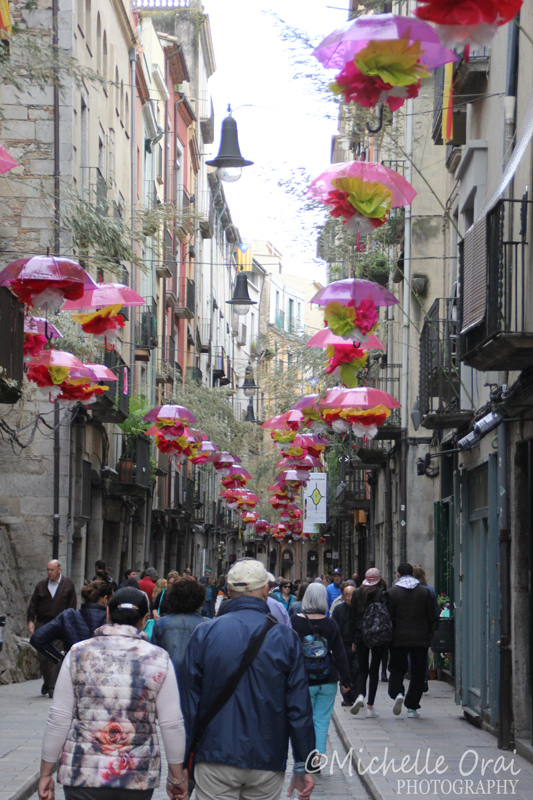 Flowers on every street 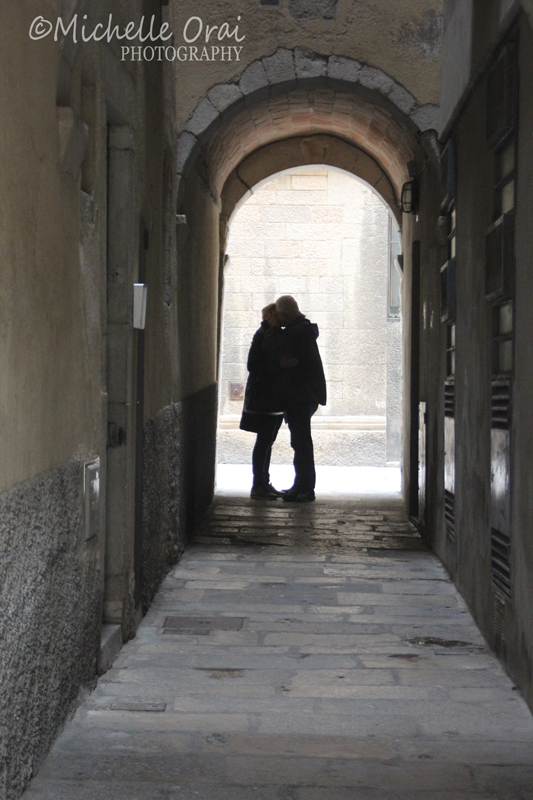 This looked so classy. 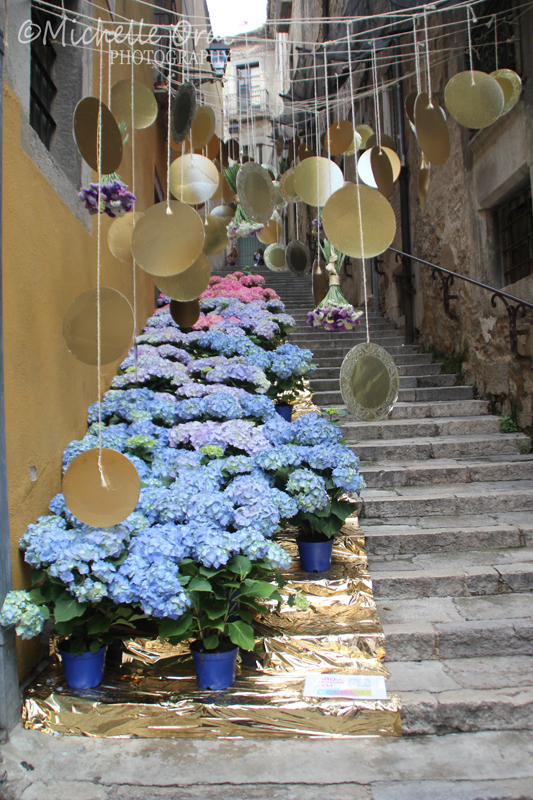 Even the umbrellas had a flower theme

Lawns to the church 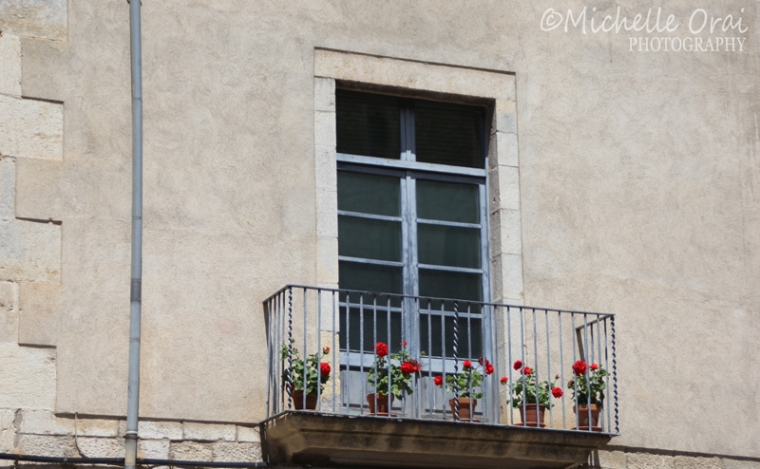 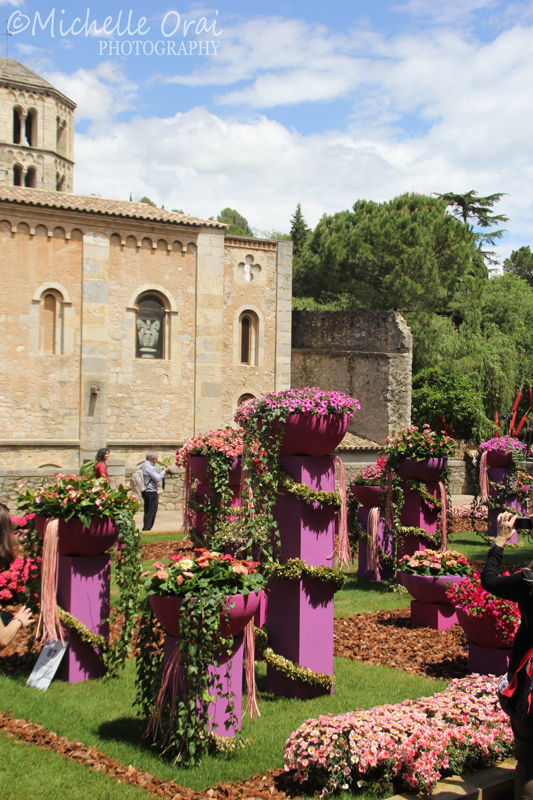 A riot of pinks 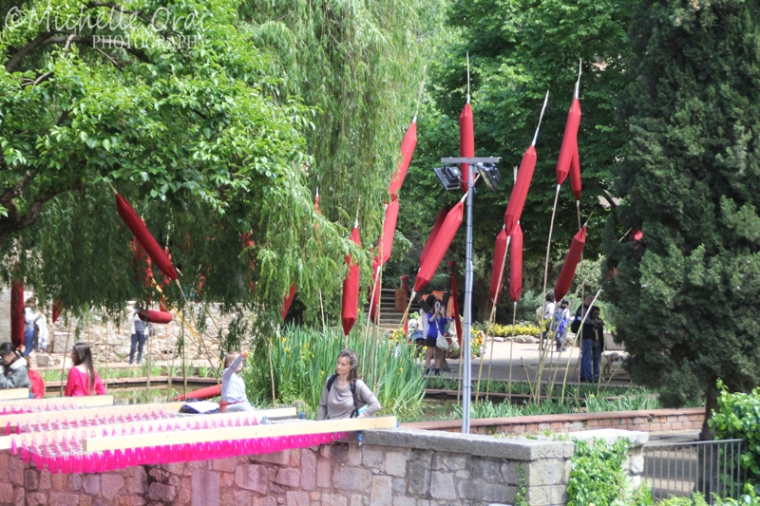 The pink in the bottom left hand corner is a collection of pink plastic glasses creating a beautiful pink shade.

Blues were in too!

Even tomatoes were used in displays 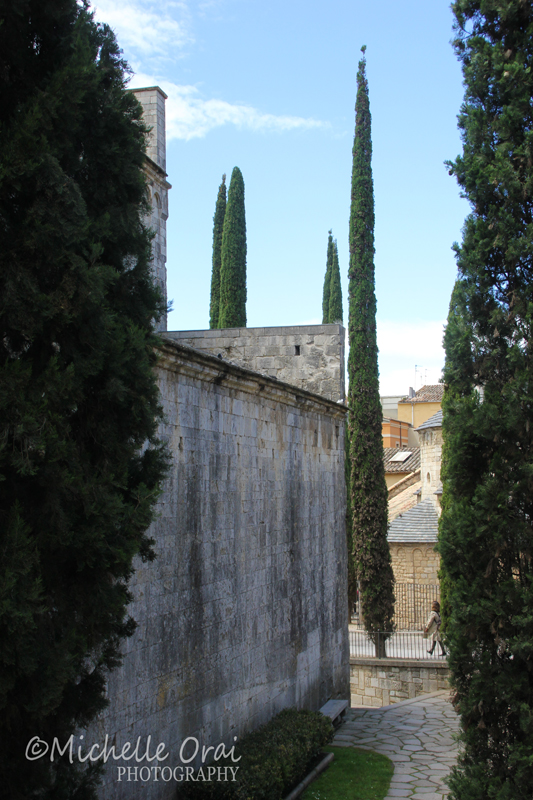 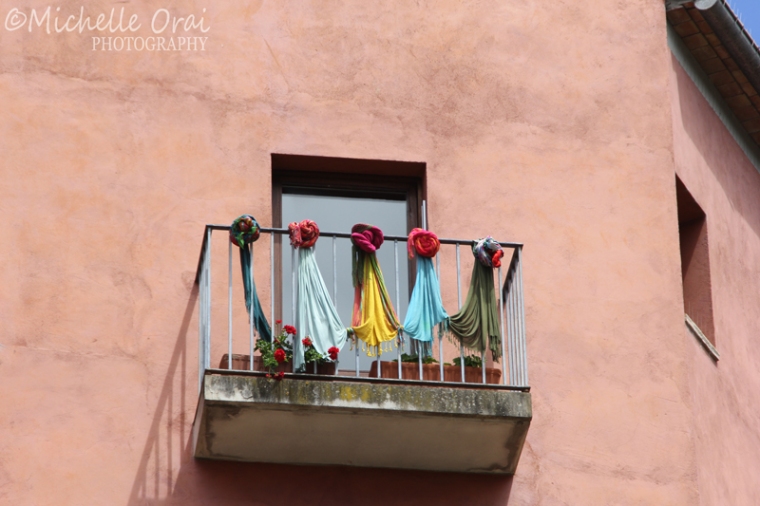 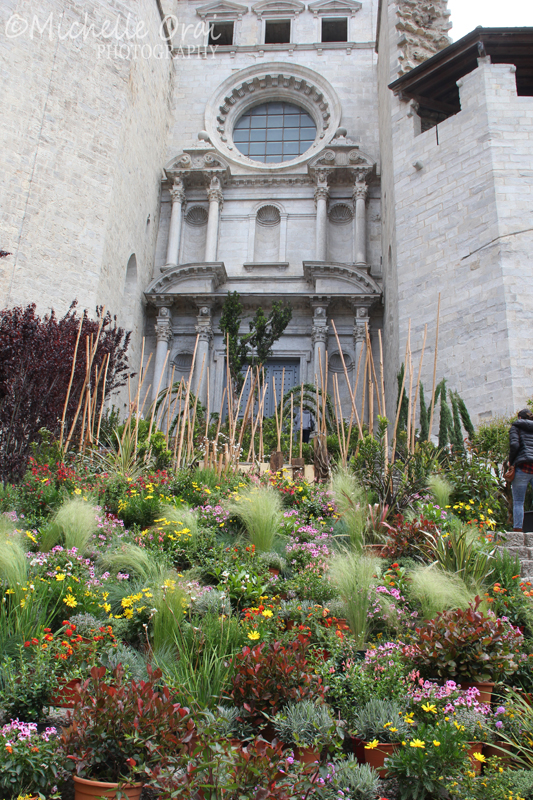 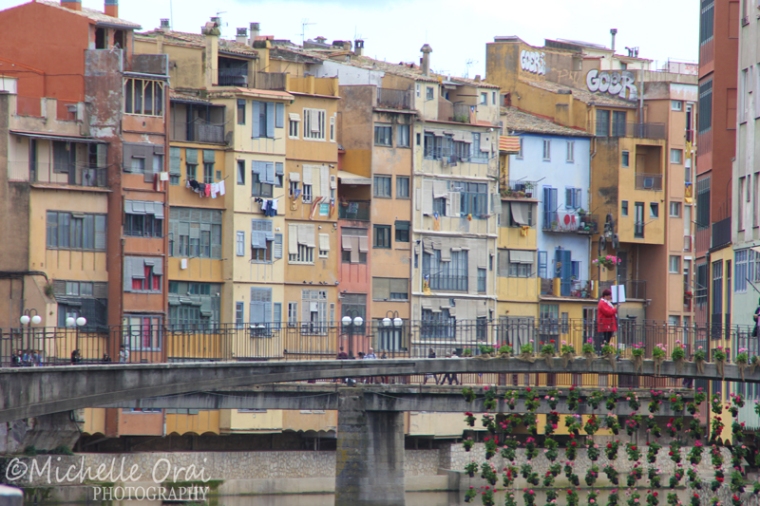 The delightful town of Girona, this is the back of the historic centre which backs onto the river

Our next day trip was to Leucate, which is inland and north of Perpignan and if I’m not mistaken I believe it is in the Aude department of France. Leucate has a port and a very large lake where oysters are farmed. We were here for a ‘degustation’ (tasting). At certain points around the lake are little fishermen’s cabins and here they serve up oysters and some serve mussels. These cabins aren’t restaurants, there are no cooked meals, just oysters and mussels and they are raw! We chose a beautiful little cabin called ‘Les deux Tontons” (the two uncles) It was gorgeous, overlooking the water, all in blue and yellow. At the entrance was a huge pile of empty oyster shells! We chose a long, wooden table with benches set with the essentials, glasses and napkins! The menu was short, oysters, oysters or oysters, different sizes but all oysters.

Oyster shell mountain at the entrance to the cabin

If we’d asked for a table any nearer to the water we’d have had wet feet!

Our table was called the ‘Bardot’ 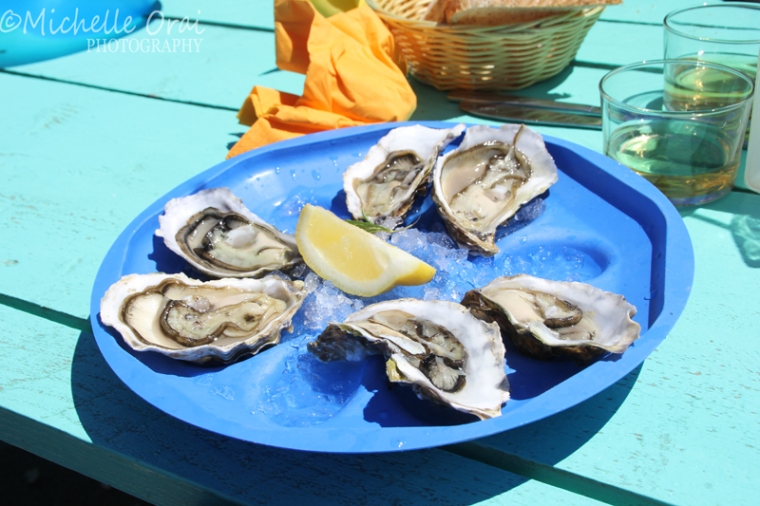 The cabin of ‘Les deux Tontons’ 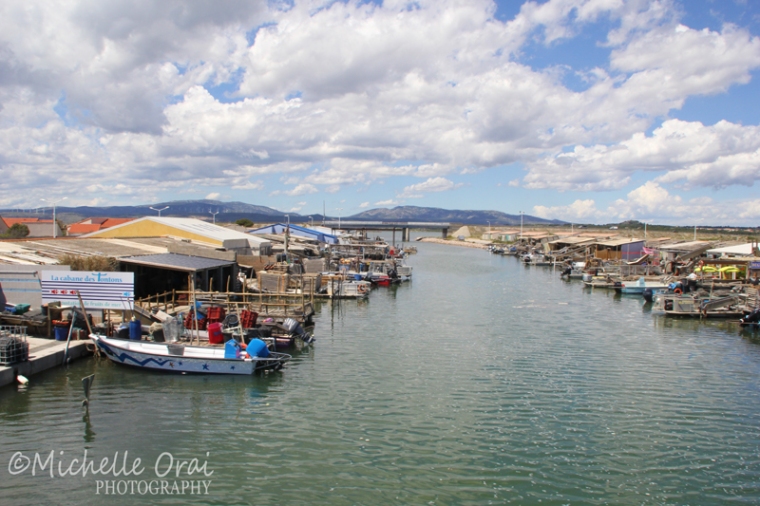 Little cabins on either side, all serving oysters

The waiter (well fisherman) dressed in Wellington boots and plastic apron  was delightful, smiling and happy, we ordered various sizes of oysters and some of the local white wine. The oysters arrived on blue plastic plates with a wedge of lemon, along with a basket of brown sliced bread. That was it, simplicity at it’s best. We sat, overlooking the water, the sun had once again come out, we were surrounded by people sitting, tasting and chatting and just generally enjoying themselves.

I forgot to mention that I’m not overly keen on oysters but these were something else! I think it was such a lovely experience, a true rustic yet working decor, surrounded by fishing nets, buoys, oyster shells, barrels and boats..What’s not to like? Oh and the oysters were really good, not at all the salty mouthful that I have experienced in the past. 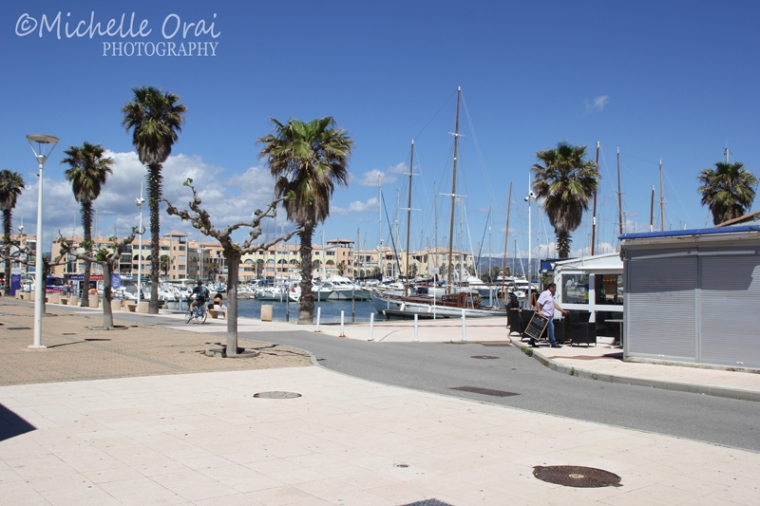 Not quite so rustic

What a way to end the day!

Our last trip was to a little village called Elne which is about 10 minutes from where we were staying. What a little find, a jewel of a village, which boasts the most stunning cloister. It has narrow steps to the top which give a 360 view out to the mountains to one side and the sea to the other. As you can see, once again the sun was out to play. 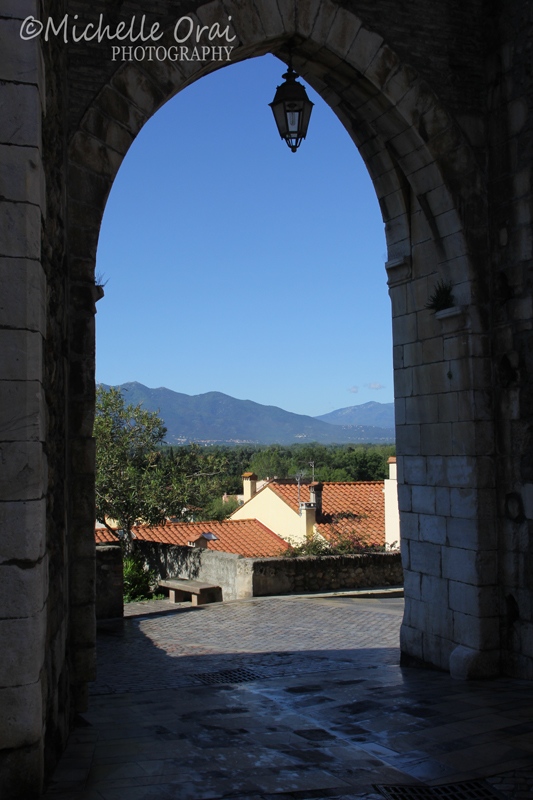 Views that take your breath away. 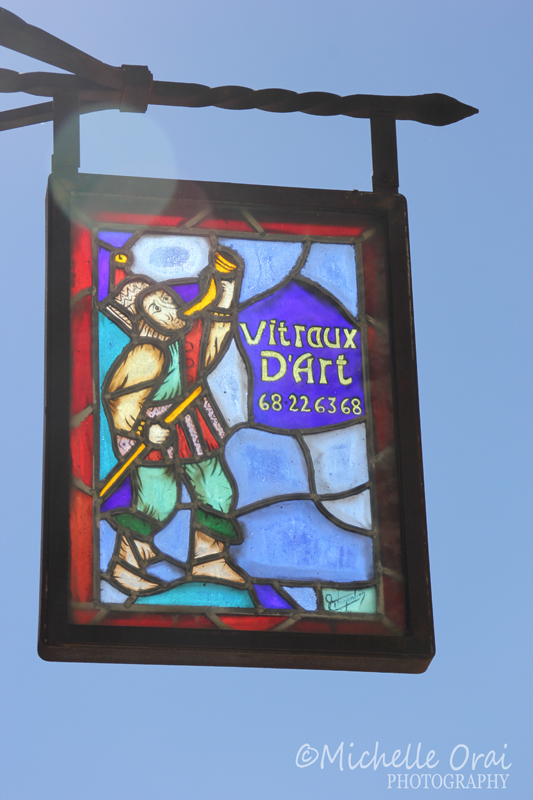 Entrance to the Cloister

All in all, we had the most fabulous week, even if we were a little obsessed with the weather, looking back at the photos I see that we were indeed very fortunate.  I apologise once again (I seem to do this on every blog post) for the amount of photos that I publish, it’s just I can’t help myself when I see so much beauty – it just has to be captured and shared!